Montenegro and Turkey have excellent friendly and partner relations, as well as strong economic cooperation with good prospects for its further strengthening, it was noted at the meeting between Prime Minister Duško Marković and Minister of Foreign Affairs of Turkey Mevlut Cavusoglu, who is paying an official visit to Montenegro.

“Montenegro has been experiencing strong economic growth over the last three years. We are an extremely attractive investment destination, and I hope that Turkish companies will be more present, and invest their investments in the north of our country. I am looking forward to the increase in trade and I expect further growth of overall economic cooperation,” said PM Marković.

He pointed to large investments in overall infrastructure, and jointly stated the new value that Montenegro, its tourism and economy can gain by valorising the airport, in which Turkish companies have expressed interest.
Minister Cavusoglu pointed out that Montenegro and Turkey have excellent relations and cooperation in all areas. He also pointed to the assistance Turkey is providing to Montenegro through its International Cooperation and Development Agency (TIKA). Turkish Foreign Minister underlined Montenegro’s importance for peace and stability in the Balkans.
The two officials exchanged views on the current situation in the region and stressed the importance of having a clear European and Euro-Atlantic perspective for the Western Balkans. The alliance within NATO is at high-quality level, and it was noted that Montenegro was contributing to the achievement of the Alliance’s goals. 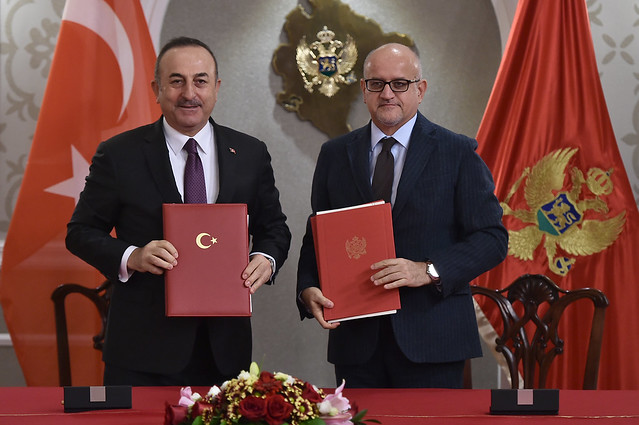 Discussed our relations and developments in Balkans w/my friend FM Srdjan Darmanovic of #Montenegro. Our cooperation is progressing in every field. W/agreement signed today Montenegrin citizens can access consular services from Turkish Embassies all around the world. @MFA_MNE pic.twitter.com/CpbNIpDsTZ

Continuous progress in all areas, alliance and an intense political dialogue characterize relations between Montenegro and the Republic of Turkey, it was noted at the meeting of the Ministers of Foreign Affairs of Montenegro and Turkey, Srdjan Darmanovic and Mevlut Cavusoglu, who is paying an official visit to Montenegro.

Minister Çavuşoğlu’s visit to Montenegro is a strong incentive to the improvement of cooperation between the two countries, which marked the important anniversary last year – 140 years since the establishment of diplomatic relations, the head of Montenegrin diplomacy stated. “Recent opening of the Consulate General of Montenegro in Istanbul and Turkey’s decision to open a Consulate, headed by the Honorary Consul in Bijelo Polje, show the importance of ties between Montenegro and Turkey,” Minister Darmanović stressed. He particularly welcomed the comprehensive inter-ministerial cooperation that our two countries established in many areas, pointing to the room for its further intensification.

Discussing friendly and partnership relations between Montenegro and Turkey, Minister Cavusoglu noted these relations are further strengthened by cooperation within NATO, characterized by dynamic economic cooperation and increased trade and direct investment. In addition to more frequent visits at the highest level, he also welcomed the significance of intensive political consultations.

Many Turkish companies recognized Montenegro’s economic potential and the economic momentum needs to be continued, bearing in mind the interest of the Turkish investors in investing to the airport management, hotel industry, maritime affairs, healthcare, textiles and wood industry, both sides noted. The two officials also discussed the issue of implementation of business forums in the coming months and both sides stated that there are numerous potentials for further intensification of cooperation in the fields of trade, energy, agriculture, environmental protection, entrepreneurship, education, sports, culture and defense. A good quality contractual base between the two countries will certainly contribute to this, which is a good basis for the implementation of projects of mutual interest.

During the official visit, the Ministers of Foreign Affairs of Montenegro and Turkey signed an Agreement on providing consular protection and an Agreement on performing paid activity of dependents of family members of diplomatic and consular representation.

The Cooperation within regional mechanisms and multilateral frameworks was welcomed.

The two officials exchanged views on current events on the domestic and foreign policy scene and relations with neighbors. They also stressed that, despite numerous challenges, it is important to preserve peace and stability to the regions, we belong.

Strengthening political dialogue on the highest levels as well as traditionally friendly relations between #MNE 🇲🇪 and #Turkey 🇹🇷 pic.twitter.com/IS2vD2jVdy

FM Darmanovic w/@MevlutCavusoglu signing agreements between 🇲🇪and 🇹🇷
🔹 for providing consular assistance to Montenegrin nationals
🔹on the gainful occupation of dependants of members of diplomatic missions and consular posts#podgorica pic.twitter.com/QSFFuTmpKw

Discussed our relations and developments in Balkans w/my friend FM Srdjan Darmanovic of #Montenegro. Our cooperation is progressing in every field. W/agreement signed today Montenegrin citizens can access consular services from Turkish Embassies all around the world. @MFA_MNE pic.twitter.com/CpbNIpDsTZ