The Prime Minister emphasised that the package includes:
– Support for economy and employees to thousands of entrepreneurs, micro, small and medium-sized enterprises, in which more than 100.000 employees operate. “The scope of support is extremely wide and involves employees in closed and endangered activities, employees on paid absences, employees in quarantine and self-isolation, up to subsidies for new employment,” the Prime Minister pointed out;
– Exemption from the fixed part of the electricity bill for the months of April, May and June – which will not be charged to users in closed activities;
– Additionally, strengthening the instruments of financial support with the Investment and Development Fund and the suspension of certain enforced collection of payments in favor of the budget;
– Specific support program for agriculture and fisheries, which is only part of a broader package that creates the prerequisites for production and growth through the engagement of all creative-production and processing resources;
– In the area of taxes and customs – shortening of VAT refund deadlines, extending the limit of the exposure of customs guarantee for payment of customs debt. “In addition, we are intervening in the area of salaries by reducing the salaries to functionaries of categories A and B in the Law on Earnings in the Public Sector. I would like to note that these are the employees with the highest salaries in the public administration!” the Prime Minister explained.
– New measures in the area of social benefits, of which basis the financial assistance will be paid to unemployed persons and another category of pensioners, who were not covered by the first package of assistance measures. In the section of the most vulnerable categories, the Montenegrin Electric Enterprise will give additional subsidies to those users, who are already recognized as the poorest, where the subsidies will double.
Prime Minister Duško Marković stressed that the proposed package of measures shows that the Montenegro Government worked committed to find the best solutions and provide additional financial potential to support our citizens and the economy.
“There are neither equal and similar states, nor the same economies and economic formulas. I would like to announce that the fiscal impact of the measures that we adopted today is EUR 75 million in gross amount. Its net worth is EUR 46 million for a three-month period. As I said earlier – the state budget belongs to every citizen and the Government is ready to bear both the burden and the responsibility of this complex and demanding moment. But this cannot be the only instrument and sole address for action! That is why I will recall earlier today – this economic challenge cannot be overcome without burden-sharing, without state and economic patriotism, without contribution from every company and individual,” the Prime Minister noted.
The Prime Minister again urged on entrepreneurs, companies and especially the banking sector – to engage acquired capital and profit and to return it to economic flows – where it is most needed, as well as to forgo unconditional profits!
“In this way, we will preserve man as the most valuable resource, maintain businesses and be ready for another momentum of development in due time. Success requires the alliance of the state and the economy, collectives and individuals, but also global risks have shown us that without solidarity, even the strong ones and the most powerful ones stumble lightly,” said the Prime Minister. 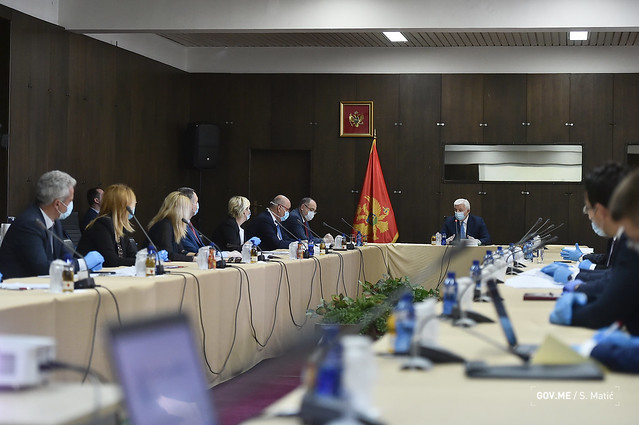 Montenegro successfully oppose the coronavirus pandemic
Prime Minister Duško Marković noted that Montenegro has been opposing the Coronavirus epidemic for the last two months and that the pandemic affects the economy of the whole world.
“Montenegro is leading the fight successfully, relying on its own strengths and potential. The visible results, which we made indicate that we are doing better than much larger, richer and more developed countries. This is, moreover, confirmed from the relevant domestic and foreign addresses every day. The global epidemic does not skip anyone and for a country like Montenegro, which is on the path of economic and overall development, the crisis has arrived at the time that leaves no room for waiting, hesitation or indecision, when it comes to preserving the economy and protecting the standards of our citizens. Although, we do everything we can to eliminate the epidemic and leave it behind us as soon as possible, the economic and social challenges that the Coronavirus imposed will not be a hallmark this year alone. On the contrary, we are aware of entering a period of long-lasting economic crisis, which we will tackle every day and every month,” the Prime Minister said.
The Prime Minister recalled that following the first urgent economic measures, the Government conducted a comprehensive and long dialogue with all important social actors, in order for the second package of measures in a line to be effective, to target those who need it most, with the aim to preserve the substance of our economy and not to lose any chance of development.
We called on social partners, economic experts, individuals from academia and of course presented all of it to the Parliament. We have taken into account dozens of addresses and initiatives of individuals and associations,” the Prime Minister said at a press conference and recalled that the first package of measures included:
– Suspension of budget spending that has no characteristics of development policies or mandatorily payments;
– Suspension of all public procurement, except for those needed for the smooth functioning of institutions, for support to priority sectors and for continuation of capital investments;
– Delaying the collection of tax receivables based on personal income tax and delaying the collection of tax claims based on reprogramming;
– Suspension of all supplementary incomes, except regular salary for the entire duration of measures to rehabilitate the consequences for employees in the system of public administration and a one-time suspension of up to one-half monthly salary for members of the Government and public officials;
– Direct financial assistance for the pensioners with the lowest-income and beneficiaries of financial support for family. Over 20.000 citizens and their families received this assistance!
“So the Government has managed this dramatic situation, saving neither money nor resources and having in view clear goals – and that is the health and lives of our citizens; while in parallel with that and immediately afterwards, the recovery of the economy and the preservation of the standard of living. Research has shown that citizens are very supportive of what we undertake and do,” the Prime Minister underscored.
It will be harder than ever in the last 50 years, but there is no retreat
Prime Minister Duško Marković said all social and individual potential had been called for fighting the pandemic. “In the continuation, with the same strength and motivation, we will continue to work, in order to preserve our economy and your standard. It will be difficult, never harder in the last 50 years, but I assure you that there is no retreat and surrender to preserve your standard, your civic dignity and safety for you and your offspring, we will not stop investments for they employ our people and boost our economy. We will fight for every job and for our domestic economic wit and potential. This will last, there will be difficult and dramatic moments, but I believe this is a chance for us, for a new and creative Montenegro. Even stronger and economically more resilient. Therefore, I regret that the last two days in Parliament our opposition did not welcome and applaud our heroes, who are protecting our health and lives. Because that is a real victory that gives us new opportunities. And we will present these new opportunities already in two weeks,” Prime Minister Duško Marković stated.
The Prime Minister concluded his address to the journalists, noting that Montenegro has been following the right path for years and that all parameters indicate that the creative energy of our people, individual and collective, with a clear strategic vision, will put us back to the path of development and progress, as soon as possible.
“I am convinced that together we have the needed potential and the ability to overcome this crisis, if we continue to be unique and united,” Prime Minister Duško Marković concluded introducing the Government’s Second package of measures to support citizens and the economy.
Source: Montenegro Government – Vlada CG
Montenegro Government Montenegro Government Montenegro Government Montenegro Government