PM Marković: Time proves that we wisely chose strategic path of Montenegro, we continue even stronger and even more committed

PM Marković: Time proves that we wisely chose strategic path of Montenegro, we continue even stronger and even more committed

On the occasion of the Independence Day of Montenegro, Prime Minister Duško Marković told the citizens that the past fourteen years since the restoration of state independence have confirmed that we have chosen our strategic path wisely, that there is no slightest dilemma whether we will continue on that path – we will – even stronger and more committed and that our state need the unity of all, regardless of how they see Montenegro.

The Prime Minister emphasised that we believed, the Montenegrin divisions were put to an end on 21 May 2006 and that we will all turn together to the arrangement of our common house, tailored to and in the best interest of all its citizens and for that reason, Montenegro is defined by the Constitution as a state of all citizens who live in it: Montenegrins, Serbs, Albanians, Bosnians, Muslims, Croats, and everyone else.
“We believed that in the new reality of a modern European Montenegro, as well as a member of NATO, everyone will find the best interest for themselves and their families; that we will work together to accelerate social and democratic progress; that the denial of the Montenegrin identity and the right to one’s own state, will remain only on the dark pages of our history once and for all. Today, fourteen years later, we must face the truth: time has denied us to a significant extent: divisions have not disappeared. In some things even – today the resistance to Montenegrin sovereignty is more radical than it was a decade and a half ago! Today in Montenegro, the same people who led the movement against independence in the referendum campaign are again leading brutal attacks on the sovereignty of the Montenegrin state. Now even with more open support from the side and an unprecedented propaganda campaign. Today they say that Montenegro is small for them; they say that unworthy heirs of their ancestors live in the capital Cetinje; and if they asked themselves, Montenegro would belong to someone else, and not to itself and its citizens! They shamelessly suggest that we want to seize churches and monasteries; to expel Serbs from Montenegro; that a fratricidal war had just begun in our country. Their media made it up, their historians are falsifying, their politicians are foisting,” said the Prime Minister.
PM Duško Marković emphasised that it is true that all religious communities in our country will have the same status within the legal order of Montenegro, harmonized with the highest democratic standards of the modern world and that all citizens of our country are equal in rights and obligations. Disputes in Montenegro should be resolved through patient and persistent dialogue, in a peaceful and democratic manner.
“Despite everything, we have achieved many of our goals in the past decade and a half: we have strengthened our institutions, improved democracy, economically raised Montenegro. This and that Montenegro do not look like each other! Time has confirmed that we have chosen our strategic path wisely and there is not the slightest dilemma whether we will continue on this path. We want – even stronger, even more committed,” Prime Minister Duško Marković pointed out.

The PM Markovic said that we do not to close our eyes to our mistakes and noted that we could have done more, if we had been better and more responsible, but also that the danger of returning to the old did not hang over our heads all the time, that danger took neither our strength nor our time, it did not to drag us backwards. 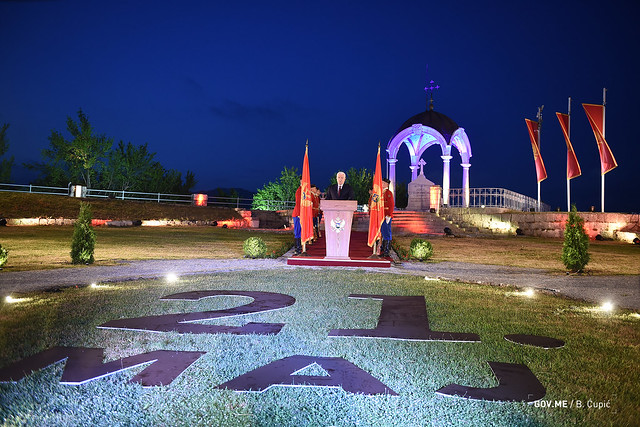 At the end of his address, Prime Minister Duško Marković emphasised that he calls on all citizens to work together for the good of Montenegro, as we had done in previous months, when we preserved the health and lives of our citizens to the fullest possible extent.
“Let’s we now preserve our economy and direct our knowledge, energy and commitment towards raising the standard of living, towards higher salaries and pensions and the creation of new jobs. That solidarity, responsibility and togetherness mark the growth of our children, who will one day tell us: Thank you for preserving our right to decide for ourselves, about our future! Happy Independence Day. May Montenegro be eternal,” PM Duško Marković concluded.